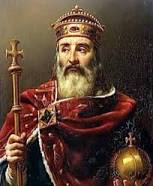 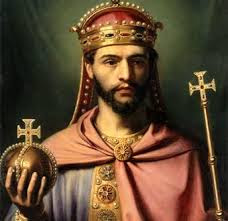 BIOGRAPHYLouis was born on 16 April 778, the son of Emperor Charlemagne and Hildegardis. About 794 he married Irmingard/Ermengard, daughter of Ingram, Graf in Haspengau. Between 795 and 806 they had three sons and a daughter, all of whom would have progeny. Irmingard died in 818, and in the following year he married Judith, daughter of Welf, Graf in Bayern und Schwaben, Graf von Altdorf. They had a son and daughter who would both have progeny.

As his father's only surviving son, Louis was crowned emperor by his father in 813 without assistance from the clergy. In 816 the pope anointed him. In 817 he issued the 'Ordinatio Imperii' that effectively divided the Empire between his three sons. However this was not the only reason for the disintegration of the Carolingian Empire. High offices had become hereditary and so less subject to the emperor's favour. As well, the Vikings began raiding the Empire more frequently.

Whereas Charlemagne had been a Frankish warrior, Louis saw himself as a servant of the Church. As a result, where the papal elections had previously required Imperial approval this was no longer the case under the rule of Louis.

In 817 he brutally suppressed his nephew Bernard of Italy. However an indication of his guilt over the brutality is that in 821 he pardoned those involved in the uprising, only to have this interpreted by the Frankish nobles in 822 as a sign of weakness.

By now he had lost control over both Church and nobility. With four sons he was also plagued by dynastic problems. His second wife, Judith, wanting the largest part of the empire for her son, joined forces with Louis' sons Ludwig 'the German' and Pippin, against Lothar the eldest son. Two factions developed in the empire, one wanting to keep it united and the other to continue the Frankish custom of dividing lands between all sons.

In 829 Judith persuaded Louis to set aside his settlement of 817 and include her son Charles in the partition of the Empire. However, Ludwig and Pippin, jealous of Charles' portion, joined forces with Lothar their eldest brother, and in 830 rebelled against their father.

The eldest three sons, supported by Pope Gregory IV, defeated their father in 833. Lothar was restored as emperor designate and Louis was forced to perform a humiliating penance. However, Ludwig and Pippin were still dissatisfied and again took up arms. In 838 Pippin died, followed in 840 by Louis. Finally in 843 at Verdun the Frankish tradition triumphed and the empire was divided between the three surviving sons.