Erasing Anne Boleyn: The Missing Documents
Very little documentary traces of Anne Boleyn remain. We know her mostly through the accounts of others - accounts that are often extremely hostile. Were her records destroyed intentionally, or by Time's indifferent hand?
Only a few of Anne's letters in her own handwriting still exist. A letter written to her father in 1514, and one written to Wolsey. We have the text of a handful of others, copied in the State Papers. Anne appears to have been a prolific correspondent, so this dearth of surviving copies would seem to indicate they were intentionally destroyed. This would not be unusual, since people would not want to be found with the letters of a convicted traitor among their papers. 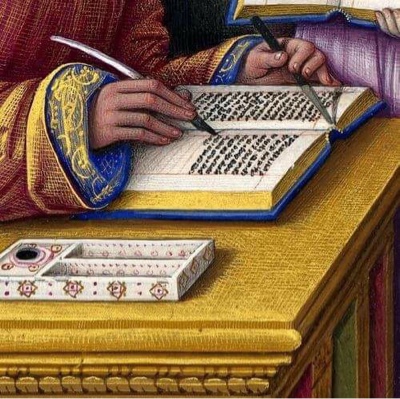 We also have a letter, supposedly found among Cromwell's papers after his execution, which is claimed to be a copy of a letter from Anne Boleyn in the Tower. Historian John Strype, who had access to records which may have been destroyed in a fire in 1731, says he saw another letter from Anne in which she angrily rejected a plea bargain which would depend on her "confessing" and would stand on her innocence, even unto death.
There are very few records of Anne's trial. Only the salacious indictments and the verdicts survive. Contrast this to the numerous records concerning Katheryn Howard, which include interviews with witnesses, reports of the investigating commissioners, transcripts of testimony, and the written confessions of the accused themselves. That was just the investigation - Katheryn was never brought to trial.
Yet nothing like that from Anne's trial survives.
We know that there once were some more records of Anne's life, because they were examined by William Camden, who had access to the state papers of Elizabeth's minister William Burghley. It was Camden who confirmed some of the biographical details of Anne Boleyn which are still subject of debate by historians. It's assumed these papers were later destroyed, possibly in the 1731 Cottonian Library fire. What we lost is almost impossible to tell. But from the silence of the early historians, it's assumed that the trial records were already gone.
But if the records of Anne's trial were - indeed - intentionally destroyed, who did it and why?
Historian David Starkey has put forth the theory that the documents never existed in the first place, that Anne was condemned primarily on verbal testimony that intentionally wasn't transcribed.
The theory explains why we don't know what Lady Bridget Wingfield supposedly confessed on her deathbed, or what was actually said by the Countess of Worcester when her brother confronted her. By contrast, Katheryn Howard's fall was a genuine investigation that generated paperwork as the investigators tried to determine what had happened, instead of a hasty frame-up to justify a pre-determined verdict.
Another theory claims that Henry VIII and Cromwell had Anne's trial records quietly destroyed because they were trying to cover up the shameful lack of solid evidence against the queen, hoping the people of the future would take the indictment and verdict at face value. The purge supposedly occurred around the same time as Henry had Anne's portraits and emblems destroyed.
Yet another theory puts forth that Queen Elizabeth had the documents destroyed when she came to the throne to try to eliminate the evidence of her mother's condemnation. But why would she leave the salacious indictment intact, if that was the case? Elizabeth seems to have taken the position that the past was past, and left it at that. She seems an unlikely culprit.
All in all, Starkey's explanation, or a purge of documents by Cromwell seems the most likely to me.
Publicado por Carlo Emanuele Ruspoli en 3:04